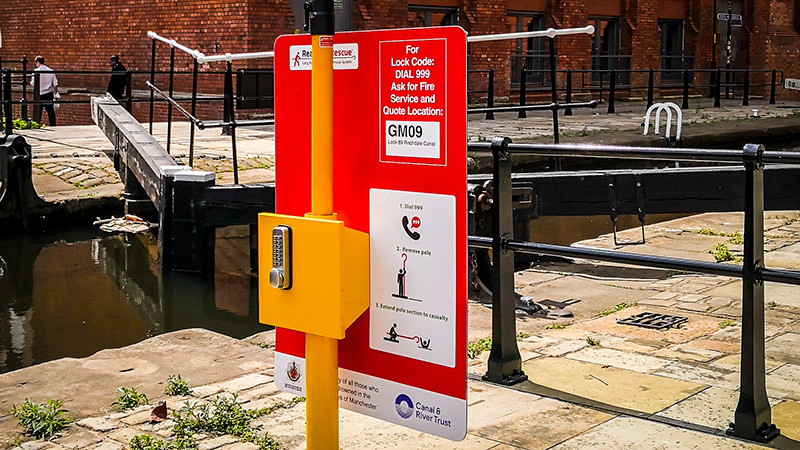 Two Reach and Rescue Portsafes installed in former accident blackspots along the Rochdale Canal in Manchester City Centre feature prominently on a report by BBC North West Tonight. Airing on Thursday 5th December, the news piece focused primarily on the safety measures that have been put in place at lock 89 of the canal since the tragic drowning of student Charlie Pope in 2018.

The Portsafes themselves were installed through extensive collaboration with The Canal & River Trust, Manchester City Council and Greater Manchester Fire and Rescue Service and through the inspirational campaigning of Charlie’s dad, Nick Pope. They are part of a larger water safety transformation in this area including safety barriers, increased lighting and emergency throwline throwbags being stationed in bars and restaurants.

Earlier today Green Watch firefighters from Manchester Central Community Fire Station demonstrated how reach poles and throw-lines can be used to help people who find themselves in difficulty in the city-centre canals.#DontDrinkandDrown #BeAMate pic.twitter.com/8ZW7uOpkPI

Firefighters from Greater Manchester Fire and Rescue Service were at the location demonstrating the ease at which the telescopic rescue pole contained within the Portsafe can be used. News reporter Mark Edwardson comments on how intuitive the poles are to use: “these poles are designed for complete novices like me to use,” he directed to Greater Manchester Fire and Rescue Station Officer David Wilson. David replied by acknowledging the spate of incidents that had occurred along this stretch of canal in recent years but added that “having this equipment nearby improves the chance of people surviving.”

David Wilson is also chair of the Manchester Water Safety Partnership who has previously attributed a portion of these previous incidents to alcohol: “a significant number of these deaths are alcohol related.”

The event at the lock coincides with the culmination of the Royal Life Saving Society UK (RLSS UK) Don’t Drink and Drown water safety awareness campaign.

Don’t Drink and Drown is a national campaign that warns drinkers steer clear of walking by or entering water when under the influence of alcohol. For more information on the campaign, head to RLSS UK’s website: https://www.rlss.org.uk/about-dont-drink-and-drown

Read about the Portsafes being installed in Manchester in summer 2019.