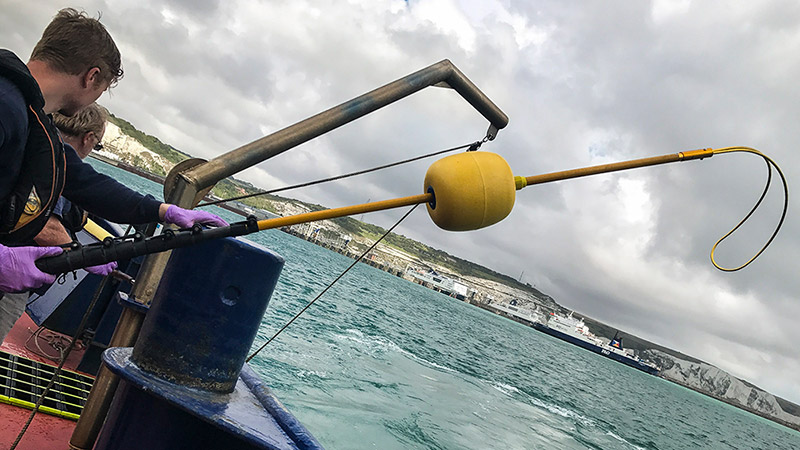 Our recent news update lifts an alarming statement from the UK Department for Transport’s 2019 Marine Safety Action Plan – commercial fishing is the UK’s most hazardous industry. In their strategy to eliminate all preventable deaths in the industry by 2027, the Fishing Industry Safety Group (FISG) identifies man overboard prevention and recovery as a key area requiring urgent improvement if this 2027 target is to be achieved.

This update will focus in particular on man overboard recovery techniques and overboard rescue procedures with suggestions on where the Reach and Rescue telescopic rescue poles can be incorporated. Whilst the directives from the UK Department for Transport centre on the commercial fishing industry, marine services globally – from busy ports and harbours to shipyards and offshore wind farms – can take heed of its safety messages. The safe recovery of a man overboard largely depends on the ability of the crew to respond promptly with the correct marine safety equipment.

MAN OVERBOARD ACTIONS TO BE CARRIED OUT

Well defined man overboard procedures vary from vessel to vessel. Specific actions that must be taken to recover a man overboard depend on a host of variables such as boat size to weather conditions and visibility. Broadly speaking though, a man overboard recovery procedure could look like this:

Whilst a clearly defined man overboard recovery procedure is vital, the time taken to undertake all these steps whilst manoeuvring the vessel prior to recovering the crew overboard means the chances of the MOB succumbing to cold water shock or hypothermia is heightened.

Furthermore, a major negative of the Williamson turn is that it is a slow process which can take 11 minutes to perform in preferable conditions. The Maritime & Coastguard Agency (MCA) advise that “unless a person is rescued within 5 minutes, it is highly likely that they will be either unable to help themselves or unconscious.” Beyond 5 minutes, a MOB’s ability to grab onto a lifebuoy, place their arms through a life sling or generally co-operate with a fishing vessel’s man overboard recovery technique is drastically minimised.

WHAT CAN A TELESCOPIC RESCUE POLE DO THEN?

A Reach and Rescue telescopic rescue pole is a vital piece of man overboard recovery equipment that eliminates the difficulties in recovering an unresponsive casualty as described above. It will:

For a real-life example: Petroleum Geo-Services (PGS) have incorporated the telescopic rescue pole into their own man overboard recovery procedures. PGS deal with seismic exploration and have a fleet of large vessels spanning the globe – each of these large vessels is supported by a team of smaller vessels. On these smaller vessels is where PGS have implemented the Reach and Rescue telescopic rescue pole system – the pole is being utilised together with the body hook and the carbon fibre line hook as part of their man overboard recovery equipment with regular safety drills being carried out.

Einar Nielson, VP and Maritime Technology Advisor for PGS, states the Reach and Rescue telescopic rescue pole is: “a very good additional rescue tool which adds value to the other tools we have.”

An example of when the telescopic rescue pole could have been beneficial being part of a vessel’s man overboard recovery equipment: Case 20 on pages 39 and 40 in the Marine Accident Investigation Branch’s (MAIB) latest MAIB Safety Digest recounts an investigation into a man overboard situation. Despite the skipper manoeuvring the vessel to 10 metres from the MOB in their effort to recover the individual, the vessel couldn’t move any closer due to the potential for the casualty to be snagged in its fishing gear. The casualty themselves couldn’t grab onto a lifering as their lifejacket was crotchless; this meant letting go of the jacket’s inflated bladder risked being submerged. In this instance, a telescopic rescue pole could have been deployed by the skipper to bring the casualty closer to the vessel or at least to keep the casualty afloat until the rescue helicopter arrived.

A thorough safety audit conducted by IMCA on a Jubilee Fishing Company Ltd. fishing vessel identified telescopic rescue poles as a necessary piece of safety equipment for this team of commercial fishermen. The team at Jubilee Fishing Company Ltd. were advised by IMCA to add this extra piece of lifesaving equipment to their kit and that they should conduct regular safety and training exercises with it.

Above is a video supplied by Paul and his team at Jubilee Fishing Company Ltd. deploying the pole whilst practising their man overboard recovery procedure.

Coinciding with the UK Government’s Marine Safety Action Plan, Maritime Minister Nusrat Ghani announced in July 2019 that £1 million in funding will be spent to permanently cut the preventable deaths in the UK commercial fishing industry. A vital step in the right direction; this money is to be spent on extra training and better marine safety equipment.

With an industry-wide drive to improve matching the funding that is now available, perhaps now – more than ever – is the best time for telescopic rescue poles to become a universal piece of man overboard recovery equipment.

Speak to us about our innovative marine safety equipment by calling us on 03301 595 088 or by emailing jo@reachandrescue.com