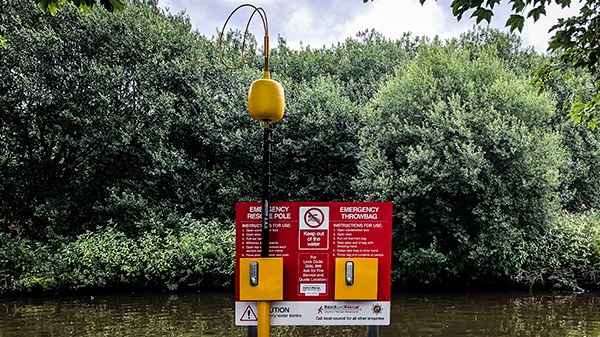 “There are obvious dangers associated with tampering with emergency equipment. The riverside walk is well-used by locals and visitor alike, and the river itself is popular with rowers. These devices are literally lifelines and their absence could lead to tragic consequences and the loss of life.” 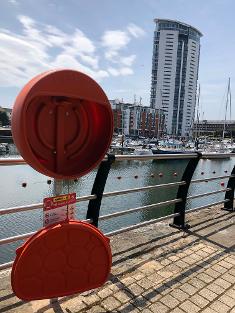 As life-rings were recently stolen along the embankment in July this year. Water rescue teams from Swansea Council were called out to the river following a reporting of vandalism and theft of safety equipment. Five life-rings were stolen in total all of which had to be replaced within hours to keep the water site safe.

Councillor Francis-Davis, Swansea Council, said “Residents can be our eyes and ears, particularly in the warm weather. If you see suspicious activity around rescue aids, spot that one has been tampered with or is missing altogether, please report it to us as soon as you can. Don’t leave it to someone else.” 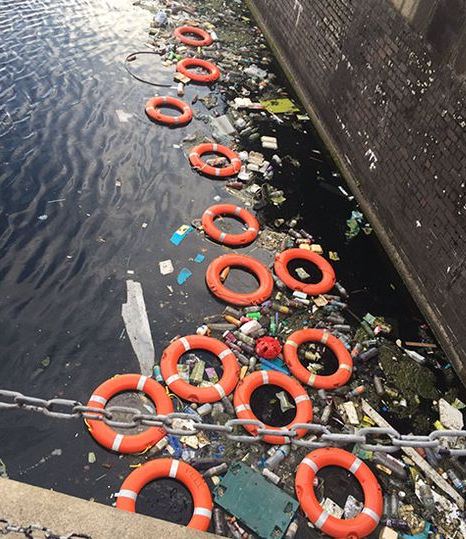 Thirteen vital lifebuoys were aimlessly tossed into the water at Salford Quays last year, and local councillors now warn anyone found “tampering with safety equipment, such as lifebuoys, faces a fine – or prosecution“.

Locals noticed the lifebuoys upon passing Salford Quays and, after taking the above photograph, informed the local council and water teams had to retrieve the wayward buoys replacing any that were damaged.

John Warmisham, chairman of Salford council’s licensing and safety regulatory panel, said “We’ve seen young people diving into the water and swimming in recent weeks. If they did get into difficulties, and the equipment isn’t there, it could lead to death.

“For somebody to carry out such a mindless act of vandalism is beyond belief.

“Anyone who sees this happening should report it to police.”

What is the solution?

Portsafe is the world’s first and only uniformed water safety equipment security system. Containing two key code operated safes, one for a throw-line and the other for a Reach and Rescue pole.

The Portsafe is cemented into a fixed position alongside the lake, canal, port, harbour or quarry and the code is only relinquished when following the instructions on the guidance and warning sign fixed to the locked safes.

Having a nearby Portsafe, keeping our public safety equipment secure, will also help reduce any vital time used by police, rescue teams and council officials at water sites across the U.K. and the world when safety equipment is needlessly damaged or stolen.

This system is by far the most secure, safest and most practical device for ensuring the integrity and security of nearby water safety equipment. It is obviously imperative that this equipment is kept safe from damage and loss and Portsafe ensures this as well as acting as a visual aid for warnings and guidance at our country’s water sites. The adoption of Portsafe at the side of a river or port will be a powerful deterrent for any would-be summer swimmers while also locking in our vital life-saving equipment, ensuring a safer environment for the general public.