Thursday 4th April was a proud day for the whole team at Reach and Rescue as we travelled to Greenbooth Reservoir near Rochdale to witness the launch of our Throwline Boards.  A total of 20 Throwline Boards have been officially installed at 8 reservoir locations across Lancashire and Greater Manchester.

As designer and manufacturer of the innovative emergency Throwline Boards, our goal has always been to make Britain’s open water areas safer by saving the lives of those in difficulty whilst minimising the risk to the rescuer.  Thursday’s launch is a huge step closer to making this goal a reality.  It is the result of an amazing collaborative effort between Reach and Rescue with United Utilities, in conjunction with Greater Manchester Fire and Rescue Service & Lancashire Fire and Rescue Service as part of their #BeWaterAware campaign.  Be Water Aware is an annual drive by national emergency services to increase water safety across the country.  The installation of these boards would not have been achievable without this close collaboration. 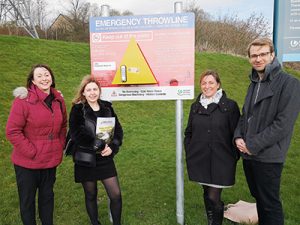 Unfortunately, the reason our joint venture is so critical begins with the inevitable fact that too many people lose their lives in open water in Britain every year.  In fact, over 700 lives a year are lost in the UK and Ireland.  According to statistics compiled by the National Water Safety Forum, almost 40% of deaths by drowning occurred in public open water areas such as reservoirs and quarries in the UK in 2017.  Quite clearly, the dangers of open water are very real.

In recognising that there is a serious need for more effective measures to increase reservoir safety and safeguard members of the public from drowning in their reservoirs, United Utilities have taken the first step by choosing to install the Reach and Rescue Throwline Boards.  The locations that our Throwline Boards have just been installed in are areas of recent deaths by drowning.

An excellent demonstration of the Throwline Board was conducted by our colleagues at Lancashire & Manchester Fire and Rescue Services at the launch that perfectly illustrates the water rescue procedure one should take when using the emergency throwline.  Watch below as an officer deliberately submerges themselves in the water before an acting member of the public rushes to the Throwline Board.  A quick call to the emergency number detailed on the front of the board grants them access to the throwline.  They then rush down to the waterside, throw the line and rescue the officer by pulling them out of the water.

Check out a video we recorded of the demonstration below:

The time taken to rescue an individual in a real-life water rescue situation is crucial.  Even the strongest swimmers can succumb to cold water shock within a few minutes.  During this demonstration, the whole sequence of events – from the officer submerging themselves to being dragged out of the water – takes less than 2 minutes.  This short amount of time maximises the victim’s chance of survival from drowning or cold water shock.

The Throwline Board is part of a wider range of Portsafe water rescue equipment already installed in various regions across the country.  In fact, the development of the initial design idea was spearheaded by Reach and Rescue with our colleagues at Bedfordshire Fire and Rescue Service.  Whilst already using our poles and water rescue equipment within their service, officers at Bedfordshire Fire and Rescue were repeatedly reporting issues of vandalised lifebuoys in public water areas.  To overcome this, we needed a new water rescue solution that:

As a result, we developed the Portsafe which is the World’s first public-access water rescue system ticking all the requirements listed above by Bedfordshire Fire and Rescue Service in the process.  What followed was a then ground-breaking water safety trial leading to multiple Portsafe’s lining the banks of the Great River Ouse in Bedfordshire.  Community Safety Officer David Lynch sums up the importance of having our innovative Reach and Rescue equipment in all public water areas perfectly when he says: “Our key message is that people should not put themselves in danger by entering the water to attempt a rescue.  The Reach and Rescue poles will allow people who see someone in trouble in the water to help them while keeping safe themselves.”

You can see this core requirement demonstrated at Greenbooth reservoir in the above video.  Watch again as the rescuing member of the public does not enter the water to rescue the submerged firefighter, but launches the throwline safely from the water’s edge.  The other key requirements outlined by Bedfordshire Fire and Rescue Service are also demonstrated in the video – the water rescue was conducted by a member of the public, it was quick, simple and effective whilst also alerting the emergency services.  What isn’t seen in the video was the arrival of a fire engine, with specially training water safety officers on board who were on hand to assist with the rescue. 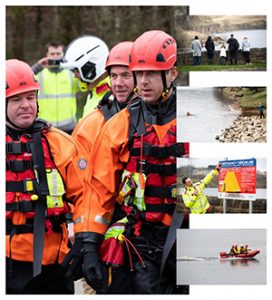 In a statement published on Lancashire Fire and Rescue Service‘s website from Thursday’s launch of the Throwline Boards, Water Services Director at United Utilities Martin Padley says: “We hope the throwlines and the information displayed with them will help deter people from swimming and, if the worst should happen, it could make the difference between life and death.”

We’re thrilled to be part of such an important initiative that will save lives.  The hope is that today’s launch will act as a springboard for more Throwline Boards & Portsafe’s to be installed across the region and throughout the country.  The continued backing from rescue services nationwide, plus brave support from the bereaved families of those who tragically lost their lives in open water will be imperative to make this a reality.  Let’s hope more organisations will follow United Utilities’ lead and install Portsafe’s as part of their own water safety schemes.

For more information on the Portsafe, head on over to the Reach and Rescue website.