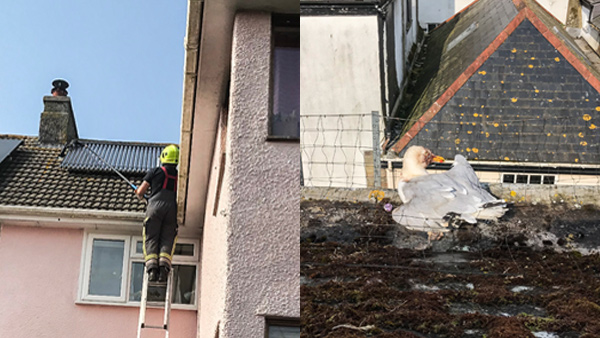 A couple of successful rescue stories to share courtesy of our colleagues on the frontline of animal rescue – the RSPCA.

First up is the rescue of an unfortunate jackdaw in Truro which had gotten itself caught in solar panelling on a residential roof. The scene was attended by animal collection officer Paul Kempson who swiftly called Cornwall Fire and Rescue to assist with assessing best course of action. As solar panel pipes can hold residual charge even when isolated it was felt the risk was too high to send someone onto the roof to free the trapped bird.

The solution deployed by the team was to pitch a ladder up against the side of the property before extending the bespoke RSPCA Reach and Rescue pole to free the bird without needing to go on the roof themselves. The plan worked and the jackdaw was successfully freed.

Paul sums up the successful rescue: “Before we had the Reach and Rescue poles this bird would probably have [died] as there was no other way of freeing it.”

Our second story centres on a gull which became caught in bird deterrent netting in Dartmouth. The poor animal was stuck for 24 hours before RSPCA animal rescuer Marije Zwager arrived on scene. She was able to not only free the gull from the netting with her specialist Reach and Rescue pole, but she captured it to then take it back to an RSPCA rescue centre for treatment. Similarly to our jackdaw in Truro, deploying the pole enabled the RSPCA operative to reach across a dangerous rooftop to successfully perform a rescue whilst managing the risk of danger to themselves.

Alongside this, the charity is also facing a huge financial strain as it is already seeing the damaging effect of this crisis on its fundraising income, while the costs of saving, treating and caring for animals continue.