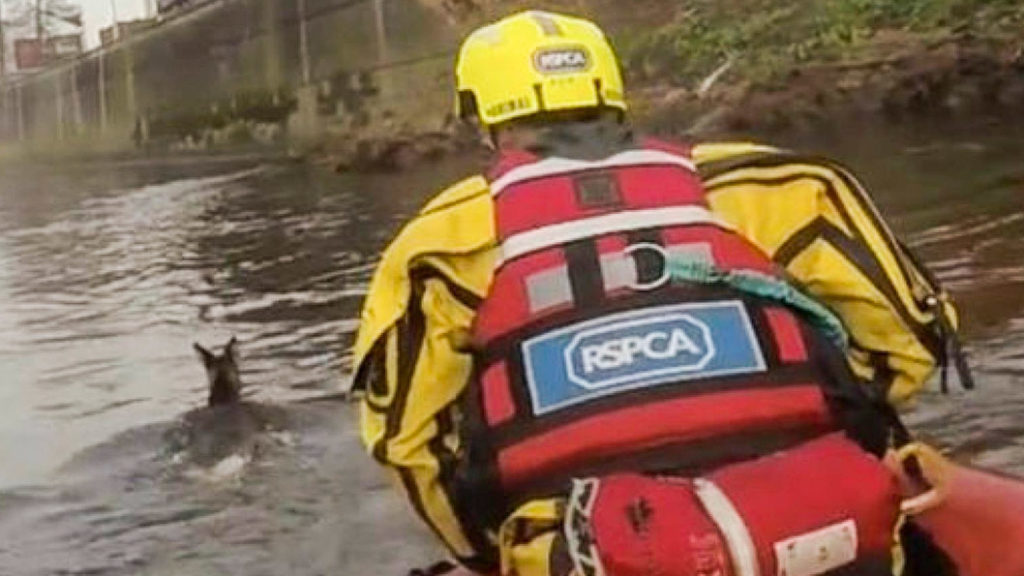 Four stranded deer – aptly given the festive names Dancer, Prancer, Dasher and Blitzen – found themselves in urgent need of rescue when marooned on a piece of land in the River Irwell in Greater Manchester after being swept downstream over the Christmas period.

RSPCA operatives using bespoke Reach and Rescue animal rescue equipment were able to safely rescue the deer in what proved to be a tense four-hour operation conducted with officers from Greater Manchester Fire and Rescue Service.

After Dasher swam upstream and Prancer managed to escape back home over a high fence, RSPCA animal welfare officer Steve Wickham reports that the rescue team deployed boats in an effort to coax the remaining deer into swimming towards the relatively safer waters upstream.

“We were hoping to guide them upstream by encouraging them to swim away from the boats in that direction, but both were struggling.”

It was at this stage he and his team decided that using the Reach and Rescue equipment was the best course of action. Steve states: “We managed to safely grab each deer from the river and hauled them on to the boat and took them back upstream where we were able to free them. They both ran off to the area we believe they live.”

From the video, it’s clear to see the team were using the Reach and Rescue telescopic rescue pole equipped with the crook attachment. The crook is a hooking tool design based on the traditional Shepherd’s hook; in this instance, the attachment enabled Steve and his team to easier hook around the deer’s neck before dragging them onto the boat.

All 550 RSPCA animal collection officers carry a bespoke Reach and Rescue animal rescue pole kit as part of their daily equipment. In addition to the crook, the kit comprises a host of animal specific tools and attachments.

At the start of the successful partnership between Reach and Rescue and the RSPCA, RSPCA Chief Inspector Ben Strangwood said: “The RSPCA are pleased to be working with Reach and Rescue and are excited about the benefits that this equipment will bring to officers and animals alike.”

“The equipment will improve the health and safety of our officers on the frontline whilst improving animal welfare as we hope to be able to resolve animal rescues more quickly and efficiently, and provide the officers with modern, bespoke rescue equipment.”

Read about the partnership between Reach and Rescue and the RSPCA.

Speak to us about any of our innovative rescue products by calling us on 03301 595 088 or by emailing jo@reachandrescue.com