Over the last few weeks and in two regions alone – death tolls and numbers of people displaced are disarming.

Hurricane Harvey has taken 30 lives, while 54 counties in Texas have been declared disaster areas. With 66cm of rainfall deluging the state, Houston Emergency Services have received around 6000 appeals for rescues, with the Coast Guard confirming only 1200 rescues – 200 of which have had to be conducted from air, because of conditions on the ground. Upwards of 30,000 people across Texas have been displaced from their homes, in addition to thousands of animals abandoned in the wake of this week’s hurricane.

Meanwhile in South Asia, heavy flooding has killed more than 1000 people this month, while thousands have been displaced after monsoon rains deluged the region. Mumbai residents this week were forced to wade through waist-deep waters in the city’s worst floods since 2005. Hurricanes are an annual and devastating visitor to North America, requiring an ongoing and proactive response to rescue calls and flood debris management. In South Asia, climate change is demonstrably amplifying the effects of monsoon season and raising the frequency of extreme weather events in the region. Home to 12 million people, Mumbai possesses poor buffer zones that do not allow for rising water levels. Additionally, pollution clogs the city’s waterways, further raising the risk of flooding. The flood threat in this region is here to stay. Unquestionably, there is an ever-increasing need for empowering communities across the globe to respond quickly and effectively in such events, as a necessary and lifesaving reinforcement for national and international emergency services.

Now is the time to rethink how preparedness could be improved at local level and across the board. A good model for disaster response is the Joplin tornado. In 2011, an EF5 tornado ripped through the Missouri town of Joplin, killing 161 people. It was the deadliest tornado in half a century. But, helped by more than 92,000 volunteers on ground level, Joplin bounced back in an unprecedented way. Experts consider it a near-perfect example of effective disaster response.

Volunteers and local organizations were the boots on the ground that galvanized the successful disaster response, while waiting for national emergency services to arrive. “We put up ways that people could get things done, instead of making them jump to get them done,” one city official said. “The various agencies and entities (at all levels) and neighbourhoods involved came together and developed priorities and plans that they then executed in tandem with one another.” The lessons of Joplin provide some ideas that emergency management experts say can help recovery in such disaster scenarios perform more effectively – particularly the importance of a locally-driven response.

So what are the tools and systems that can be supplied at local levels to ensure a more consistently successful response to crises requiring water rescue?

This is precisely where Reach and Rescue’s globally unique rescue poles and truly functional attachments can come into play and make a remarkable difference to the efficiency of disaster response, on both macro and micro levels across the world. Reach and Rescue’s telescopic poles provide a reach of up to 17m, enable quick rescues with directional accuracy, and – very importantly – keep rescue operators and responders safe from collateral risk by allowing them to conduct a rescue from a safe location, without needing to venture into further hazardous waters. 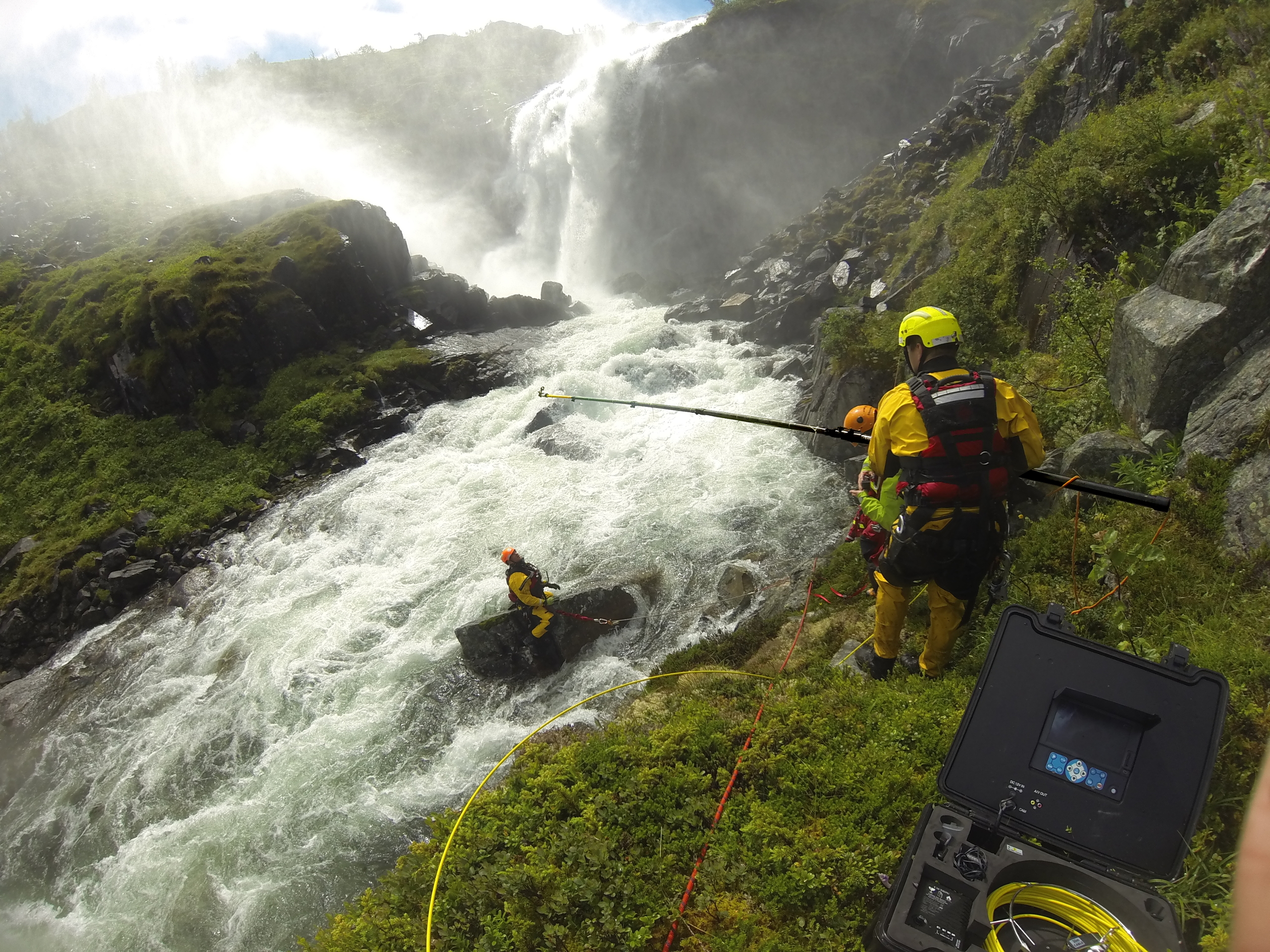 “The Reach and Rescue Pole has to be one of the most innovative water rescue aids of the decade.”

As an example of preparedness on local level – take one of Reach and Rescue’s clients – the Portreath Harbour Association in Cornwall. Here we have a forward-planning group that has realistically assessed the safety issues surrounding a harbour community, and wisely addressed those risks by investing – as a collective – in one of Reach and Rescue’s telescopic pole kits. Their kit is housed in a purpose-built container that is centrally located and accessible to a large number of community members, ensuring that – in the event of a drowning, flood or accident – immediate and effective action can be taken thanks to the speed, directional accuracy, 17m reach and versatility of Reach and Rescue’s pole. Furthermore, collateral risk to the rescuer is avoided because the length and telescopic design of the pole enables them to deploy this unique rescue tool from safe ground, and retrieve the casualty without needing to step into dangerous waters.

Portreath Harbour Association’s approach to the Reach and Rescue equipment is a testament to the simplicity with which these poles and attachments can be used. Every kind of operator, in any context, can quickly and easily learn to deploy a Reach and Rescue pole with the appropriate attachment. Reach and Rescue’s telescopic pole expands simply and securely in deployment; then retracts just as simply for retrieval. Given the devastation being caused by extreme weather events on multiple continents, it is gravely important to consider furnishing communities across the board with these kits. Equipped with such effective rescue systems, communities could expect to see higher numbers of successful rescues and a likely drop in death tolls. Thanks to the 17m reach of the Reach and Rescue pole – responders can conduct rescues from a distance in rough conditions, all the while remaining in a safe zone. Reach and Rescue’s equipment could, in many cases, eliminate the need for performing complex, slower and directionally less accurate rescues from the air, as the Coast Guard was forced to do this week in Texas.

And the same applies to the Indian subcontinent, which continues to face worsening weather events. For Your Rescue in India say of Reach and Rescue’s systems: “Reach and Rescue offer a unique product. It not only takes care of rescuer-safety, it also saves lives. This product successfully deals with water rescues. It is so simple to use but so effective, especially in vertical rescues for saving people who have fallen into wells or deep pits. The Reach and Rescue system is outstanding.”

Of the Reach and Rescue pole system, Warwickshire Fire & Rescue Service says: “This product substantially enhances rescue capability of fire crews and reduces the need to plan and train for firefighters entering water to attempt rescue.” Reach and Rescue’s comprehensive range of insightfully designed attachments facilitate swift and accurate rescue in all scenarios and conditions, while their unique search camera attachment and underwater inspection camera enable searches to be carried out at height, under water, in mud and on ice. Debris removal after flooding is also a function that can be carried out using Reach and Rescue’s versatile equipment.

Reach and Rescue’s ever-popular Wading Pole, featuring a water gauge, has been used to demonstrable success by flood-response teams and Fire & Rescue services across the UK. Of the Wading Pole and range of attachments, a client at Watersafe UK says: ”This is a great bit of kit. You can really go in full on in range and rescue anybody in any circumstance with Reach and Rescue’s equipment. Absolutely superb.”

Reach and Rescue’s Rescue Raft is the smallest and lightest single occupancy raft in the world, designed to withstand extreme climate conditions and produces exceptional in-water stability. Packed in its tiny integrated valise, it fits into the tightest of spaces and should be a part of every water rescue kit. Furthermore, Reach and Rescue’s complete and comprehensive Animal Rescue Pole Kit facilitates the quick and accurate retrieval of animals caught up in and displaced by natural disasters, such the thousands affected by Hurricane Harvey and India’s monsoons this week.

It is worth noting that Reach and Rescue’s range of attachments accommodates rescues of casualties that are conscious or unconscious, cooperative or uncooperative, human or animal. Northern Ireland’s Lagan Search & Rescue says of our systems: “This vital lifesaving equipment is light and versatile. We have trialled it with great success in both the River Lagan and with our rescue boat in coastal environments. We can recommend this product to all those involved in lifesaving.”

Disaster Response Management agencies worldwide would undoubtedly benefit from empowering local and regional communities to tighten up crisis response by furnishing them with effective, simple to use rescue equipment in the face of natural disaster such as storms, hurricanes and floods. Hungary’s Armadillo Hovercraft Rescue & Response Support Unit calls the Reach and Rescue system “an extension of a rescuer’s arm and a must-have kit.”

A UK-based designer and manufacturer of rescue equipment, REACH AND RESCUE MAKE THE LONGEST, MOST VERSATILE AND SUCCESSFUL RESCUE POLE SYSTEMS IN THE WORLD.