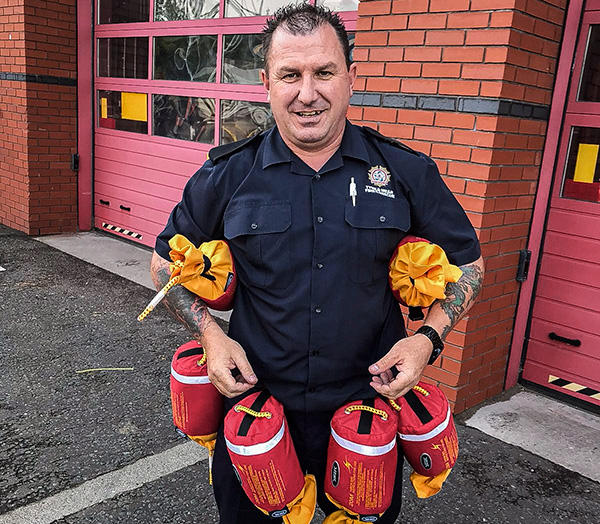 More than 700 people drown in the UK and Ireland every year and many more have near-fatal experiences with some suffering life-changing injuries as a result of misadventure in water.  We discussed the wave of tragic water-related incidents that have occurred in Greater Manchester over the years in a recent article and discussed what councils in the region are doing to positively respond to accidental drowning.

Accidental drowning is a prevalent problem not only within the UK, but across the globe too – many of those affected by open water tragedies are leading the way in raising awareness of water safety and associated preventative measures.

One such advocate is Firefighter Tommy Richardson who has been part of the Tyne and Wear Fire and Rescue Service for 15 years.  Tommy, who works within the Prevention and Education team was previously based at Byker Fire Station in the East end of Newcastle, which is a water rescue station.  He explains, “We had an increasing problem within the rivers in our area and a high number of calls received for water related incidents.”

Tragically in 2013, Tommy was part of a crew that recovered the bodies of two teenagers from a local river; an event that has always stayed with him and was a fundamental driver in his quest to raise awareness of water safety, prevention and education. “At that time, not much was being undertaken to promote and educate people on the issue and I knew that had to change,” Tommy told us.

Soon after, he approached the Prevention and Education Department, began working with them and partnering with individuals like Dawn Whittaker, Chief Fire Officer at East Sussex Fire and Rescue Service who is the NFCC Drowning Prevention Lead.

Tommy also took to social media, doing all that he could to publicise messages surrounding water safety and to prevent future fatalities. “I know that social media platforms can receive a lot of negativity, with trolling and so on,” admitted Tommy, “but used correctly, we can send messages far and wide – worldwide in fact – getting senior people involved and spreading the word from the top down.”

And speaking of social media, it’s Twitter that Tommy has to thank for his newly-coined nickname, “Throw Bag Tommy.”  We launched Reach and Rescue’s Throw Bag Challenge earlier this year to raise awareness of water safety and how Throw Bags thrown accurately can save a life.  Those accepting the challenge are asked to stand ten paces away from a water bottle, before aiming and throwing the bag, which is attached to a safety line, as closely to the bottle as possible…ideally knocking it over.  Videos of people taking the challenge have proved popular online.

In an emergency situation, the bag would be thrown towards a victim to catch, so that they can be pulled to safety. Tommy added, “I was more than happy to get involved with Reach and Rescue’s Throw Bag Challenge.  It’s a great initiative and was designed to have a bit of fun whilst highlighting the dangers of open water.”

Tommy has played a significant part in introducing Throw Bags into pubs, bars and clubs along the Newcastle quayside.  He explained, “I previously worked for Newcastle City Council for 18 years, so knew a lot of the councillors who needed to be contacted.  When contacting them to discuss the idea, their response was ‘it’s a no brainer; we decided that if we were to train the door supervisors and staff at clubs and pubs along the river, and provide them with the relevant equipment, we could potentially save lives.”

The scheme has done just that.  To date, four people have been saved with Throw Bags by one quayside pub, with the staff involved in the rescues receiving commendations for their efforts.  With the scheme expanding, further trials are being carried out in the south of England with fire and rescue services providing training to public bars and pubs along the Thames.  Parts of Devon and Cornwall are following suit, along with cities including York, Norfolk, Liverpool and Manchester.

Reach and Rescue also manufactures the telescopic rescue pole which can be used in place of, or in conjunction with a Throw Bag.  “I’ve had a go of one of the poles but have luckily not had to use one [in a rescue situation] yet,” explained Tommy.  “It’s a fantastic add on for when a person is unconscious or unable to follow instructions.  We’ve also heard stories of owners having jumped into open water to rescue their dog.  The dog gets out, but the owner sadly loses their life, so the pole will be a great aid for rescuing animals and avoiding further such instances.”

Tommy puts his water safety knowledge to good use through volunteering for the Royal Life Saving Society UK (RLSS UK) and supports and promotes the great work the organisation does across the country.  It’s truly a huge part of his life.  He remains passionate in spreading the word about the importance of water safety and why the availability of Throw Bags, Telescopic Rescue Poles and other life-saving equipment is so essential at watersides across the UK and beyond.

Tommy concludes, “I’m passionate about water safety and improving education – let’s just get as much knowledge out there as we can!”

We’ve compiled all our favourite Throw Bag Challenge videos into an entertaining YouTube playlist – check it out and see if you can spot yourself: https://www.youtube.com/watch?v=ISwhDA1xnF4&list=PL8vXj26bG3a7BYOA-Dm8oJA90HumiSowk