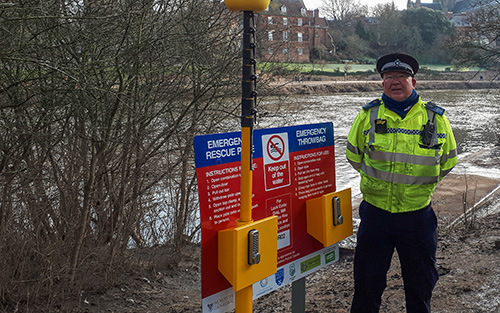 A Portsafe featuring a long-reach telescopic rescue pole & emergency throwline has been installed alongside the River Severn in Worcester city centre. This Portsafe commissioned by South Worcestershire Police Cadets as part of West Mercia Police’s Home and Dry water safety campaign is the second Portsafe to be installed in the city after the Royal Life Saving Society UK’s Portsafe installed in 2019 in memory of University Student Tom Jones.­

The Home and Dry water safety campaign is committed to reducing the number of water related deaths in the West Mercia region and beyond through ‘education and improved physical prevention’. Portsafe’s highly visible design supports this demand for prevention; it functions successfully as an effective deterrent and information point which increases awareness of the inherent dangers in the river for members of the public.

Furthermore, Portsafe’s long-reach, telescopic water rescue poles – enabling members of the public to carry out accurate rescues themselves – are proven lifesavers after it was successfully deployed to save a member of the public from drowning in Bedfordshire in 2019.

Below is an excerpt from South Worcestershire Police Cadets’ press release:

“In September 2018 So­­uth Worces­­tershire Police Cadets were awarded £2000 from the Police Community Fund to spend wisely and to the benefit of the Community.

The tragic loss of Worcester University Student Tom Jones, who had fallen into the River Severn and had drowned, was in the news. At Cadet Night the Cadets suggested that we spend the award on providing more lifesaving equipment and training people how to use it.

As part of our proposal to train the South Worcestershire Police Cadets every member of the 2018 cohort attended and was assessed as competent for Water Safety Life Support by The Drowning Prevention Charity run by the Royal Live Saving Society UK. The basic Water Life Saving Skills gave the Cadets skills in throwline and use of a pole to rescue anyone struggling in water.

After much discussion within the Home and Dry forum, Tom Jones’ parents purchased a Portsafe in memory of Tom and had the board erected next to Sabrina Bridge. It was suggested that a South Worcestershire Cadet Sponsored Board be purchased to compliment the Tom Jones Board.

With an increase in costs beyond the £2000 generously donated by The Police Community Fund for our project they immediately said yes to the increased funding required.

With the assistance of Worcester City County, Riverside Park and Worcester Cathedral a suitable site was found at Swan Steps Bromwich Parade. With all partners on board and the design agreed the Portsafe Water Safety Board went to the printers in December 2019.

After four floods with the site unavailable for sixty days, a Pandemic, three lockdowns, outbreak of avian flu the Portsafe Water Safety Board has finally been installed and is ready for use. Located to the side of the Swan Steps on Bromwich Parade. The board consists of two locked cabinets, one cabinet contains an emergency throwline and in the second the long-reach telescopic rescue pole.

If you need to use the Rescue Pole or Emergency Throwline dial 999 immediately and quote Location WOR02 and the operator will give the code to the cabinets. Instructions on how to use the equipment is printed on the board.”