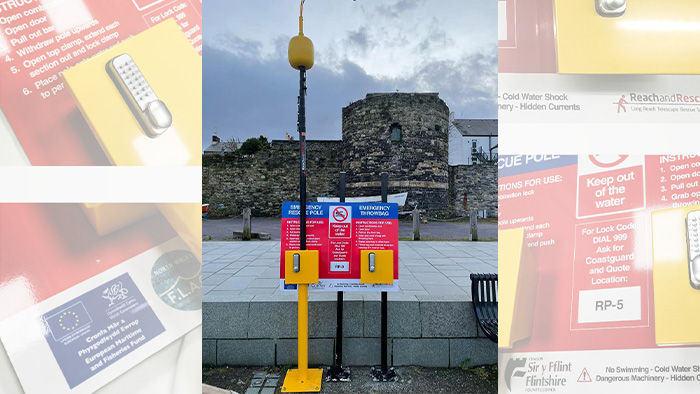 Reach and Rescue’s lifesaving Portsafe public access water rescue system has been installed at numerous waterside locations across North Wales as part of a campaign to improve community safety.

Purchased by non-profit local action group Menter Mon with support from the North Wales Fisheries Local Action Group (NWFLAG), the Portsafes are situated in specific locations intended to boost the safety of fishermen working at the busy harbours, as well as improve the safety of visiting members of the public.

According to the most up-to-date official statistics compiled by the National Water Safety Forum, there were 12 incidents of accidental drowning at either a harbour, dock, marina or port in the UK in 2019. Taking into account all the data, it is runners and walkers who make up the majority of those who accidentally drowned in 2019. In other words, it is members of the public with no intention of entering water who are most at risk.

This point is of utmost importance to Menter Mon. A key objective in their partnership with NWFLAG to support the fishing industry and associated communities is ‘preserving and enhancing the environmental, cultural and social welfare’. When talking about the welfare of visitors to water locations, Portsafe fits right into this objective. Its highly visible design means it stands out on the water’s edge. Its warnings are noticeable. This enables Portsafe to not only function as water rescue equipment, but to provide an effective information point thereby increasing water safety awareness of for anyone who passes.

Furthermore, the long-reach rescue poles securely contained in the Portsafe offer means to recover casualties in water accurately and in a much faster timeframe when compared a life ring. Crucially, they’re less prone to vandalism or theft when compared to life rings too.

These locations serve both private and commercial use – another important point as it is vital that water safety equipment satisfies the demands of whoever is using the location. As the marine industry is one of the UK’s most dangerous industries, with commercial fishing being declared the most hazardous by the Department for Transport’s 2019 Marine Safety Action Plan, effective water safety and rescue equipment is a must.

The UK’s Port Marine Safety Code states Harbour Masters have a duty to undertake a proper risk assessment of their port and then take reasonable steps to manage this risk down to acceptable levels. Evidence already highlighted in this article demonstrates the hazard of accidental drowning in harbours, docks, marinas or ports is present. Hence the inclusion of Portsafe – an ever-present water rescue system – will become commonplace as more action groups like NWFLAG work to improve the safety of the fishing industry.