On the Frontline of Animal & Wildlife Rescue Worldwide 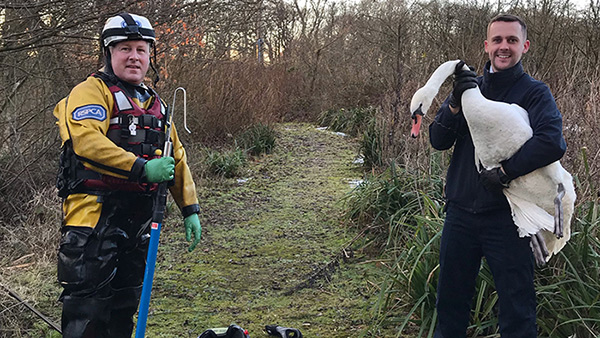 In his recent presentation at the Global Animal Disaster Management Conference in New Zealand, RSPCA Superintendent Tim Minty spoke of their collaboration with Reach and Rescue as a “milestone achievement” that has “changed the capability of the organisation.”

Prior to adopting our long-reach telescopic rescue poles and animal rescue equipment as their standard tools to recover injured wildlife, RSPCA animal welfare officers were putting themselves in undue risk to rescue wildlife. Indeed, Tim Minty states in his presentation that the out-of-date equipment previously used by the RSPCA was “putting officers at risk, and when they’re put at risk, they will start risk taking.” Tim explains that this is due to the fact the culture at the RSPCA influences a workforce of “very committed individuals… their drive is to save animals.”

This point is best illustrated with the below video in which RSPCA animal welfare officer Marie Stevens deploys her bespoke Reach and Rescue animal rescue pole to save the life of a trapped gull. Marie said at the time that the rescue would have been impossible without the pole as “this gull was otherwise unreachable by other means.”

Marie’s comments certainly support Tim’s assertion that our animal rescue equipment has broadened the capability of RSPCA animal rescuers; it seems that Marie would have been put in undue risk in her desire to rescue this bird with the previously outdated equipment. Presently though, as seen in the video, she was able to successfully release the trapped bird whilst keeping risk to her own safety at an absolute minimum.

Having bespoke fit for purpose animal rescue equipment also serves to boost the morale of RSPCA’s workforce. Most of the tools comprising the RSPCA’s Animal Rescue Pole Kit are developed from end user feedback – such as the bird net . “Only our animal collection officers could come up with that idea,” says Tim in his presentation. Indeed, the bird net is such a simple solution that frees and captures a stricken bird at the same time. Utilising this tool which they helped develop has given RSPCA animal collection officers a sense of pride and confidence to “be better at what they do.” Furthermore, Tim concludes: “The rounds of applause you get from the public [when using the bird net] is something to behold.”

A Day in the Life… Wildlife & Bird Rescue with RESQCT in Pune, India

Further afield is animal welfare charity, and all-round experts in technical animal rescue, are RESQCT in Pune, India. They’re often in high demand, receiving frequent calls to recover animals from dangerous heights – as seen in the video below.

Animals getting trapped in manja – or kite wire – is a common problem in India. However, through use of our long-reach animal rescue pole and attachments, the team at RESQCT are able to keep the risks involved in animal retrieval to a minimum. Testament to the pole’s versatility, they’re able to recover 4 animals – 2 pigeons, a kite and a bat – from heights otherwise difficult or downright impossible to reach all whilst keeping their feet firmly on safe ground.

Below is a selection of real-life animal rescue images with a host of UK wildlife being safely recovered. Hover over the image to see which animal is being rescued.

For prices, more information
or to place an order for our animal rescue equipment – get in touch.