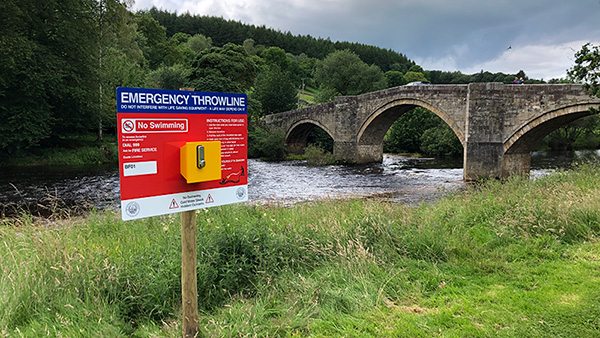 A Reach and Rescue Portsafe with emergency throwline has been installed alongside the River Wharfe on the famous grounds of Bolton Abbey in Yorkshire. With thousands of visitors every year in close proximity to the fast-flowing river, the team at Bolton Abbey decided the time was right to reassess their water safety equipment. Our Portsafe was chosen not just to ensure permanent access to effective lifesaving water rescue equipment at this high risk location, but for the fact the throwline board’s bold design clearly features warnings specific to the river. These highly visible warnings act as deterrent for anyone contemplating getting too close to the water reducing the potential of accidental drowning going forward.

In response to anti-social revellers swimming in Exeter Quay – discussed in last month’s ‘Inevitability of Accidental Drowning’ news piece – the charity SAFE South West, along with Exeter City Council and Devon and Somerset Fire and Rescue Service (DSFRS) have decided enough is enough. In order to eliminate the tragic number of accidental drownings, or near drownings, that are happening every year in the Quay, the collaboration is launching a campaign to crowdfund the installation of at least six Portsafes – some containing emergency throwlines and some with long-reach telescopic rescue poles. Having lifesaving water rescue equipment permanently situated alongside the Quay will contribute significantly to reducing the amount of drowning occurring, plus – as with the Portsafe at Bolton Abbey – it will act as a deterrent to dissuade swimmers from entering the water in the first place.

The campaign is desperate for donations. Head to the campaign page HERE and please donate if you can. 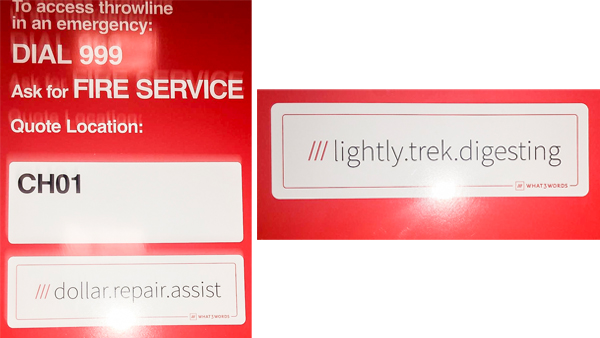 what3words is a simple way to define location. The system has divided the whole world into a grid of 3x3m squares and assigned each square a unique three word address which can obtained via an app or the what3words website. A specific three word location is advantageous for 999 call handlers as opposed to a street name or post code as it gives them the ability to coordinate a speedier response to an exact location. what3words has been adopted by 97 UK emergency services to date and has now been adopted by Reach and Rescue too.

Time is extremely valuable when someone is struggling in the water. Portsafe gives members of the public an opportunity to conduct a swift rescue of someone in the water whilst alerting the emergency services. By providing an exact 3x3m location to the emergency sergices, they will locate the incident as quickly as possible too. what3words is especially useful for large areas with multiple Portsafes – such as Exeter Quay described above. Emergency services will know exactly which Portsafe to head to and the caller can focus on rescue instead of describing a location they may not be familiar with. Reach and Rescue is recommending what3words be included in the design of all Portsafes going forward. 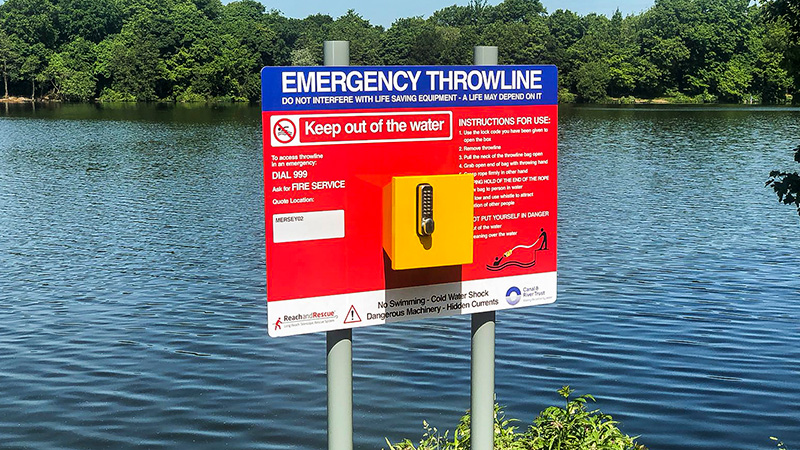 In our latest collaboration with the Canal & River Trust, and in partnership with Merseyside Fire and Rescue Service, three Portsafe’s with emergency throwlines have been installed at Carr Mill Dam near St. Helen’s. A popular venue for water sports and angling, the Portsafe’s will provide a boost to the safety of the public who visit this beauty spot.

Julia Shelley, area operations manager for the Canal & River Trust, said: “We hope these new safety throw lines will never have to be used but if the worst happens, and someone accidently falls in, they could save someone’s life.”

The Portsafes at Carr Mill Dam are the latest success in a long standing collaboration with the Canal & River Trust. Most notably, Canal & River Trust installed Portsafe along the Rochdale Canal in Manchester city centre in 2019.