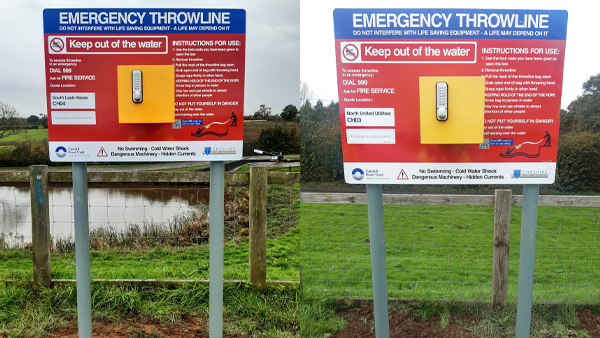 Two Reach and Rescue Portsafe’s with Emergency Throwline Boards have just been installed alongside Hurleston Reservoir in Cheshire by Canal and River Trust. The area is a renowned local beauty spot attracting members of the public as well as being the site for a popular angling club. In a bid to make the area safer for the increased footfall, Canal and River Trust have collaborated with United Utilities and Cheshire Fire and Rescue Service to get these Reach and Rescue designed boards placed by the water.

In the UK, drowning causes more accidental deaths among the general public than fire or cycling. Sadly, Hurleston Reservoir is no stranger to drowning with 44 year old Ethol Price tragically drowning there in 2015.

The Emergency Throwline Boards installed by Canal and River Trust are designed to give members of the public crucial opportunity to carry out swift water rescues themselves by giving permanent access to lifesaving water rescue equipment. The emergency throwlines are contained in lockable boxes which are accessible via a code given by the 999-call handler when ringing the emergency services.

These Emergency Throwline Boards are also amongst the first in the country to feature what3words locations. Used by emergency services nationwide, including Cheshire Fire and Rescue Service, what3words divides the globe into 3m squares with each square being given a unique 3-word address. For the emergency services, it means they can find the specific location of an incident much quicker and easier, further increasing the chance of survival should a person find themselves in danger in the reservoir’s water.