Last month we debated the possibility of the UK being in the midst of a water safety crisis due to the tragic spate of accidental drownings occurring nationwide on a weekly basis.  The North West of England is no stranger to accidental drowning; in fact, incidents of accidental drowning are so prevalent in Manchester alone that it has spawned the legend of a ‘Manchester Pusher’.  A September 2018 BBC News article debunked the myth of the pusher with author Dan Box providing ample evidence to suggest that the cause of the drownings occurring in Manchester are not the work of some malevolent serial killer shoving pedestrians off the canal towpath at night, but the unfortunate result of accident and misadventure – furthermore, according to David Wilson, chair of the Manchester Water Safety Partnership:  “a significant number of these deaths are alcohol-related.”

Councillors and emergency services across the region together with national waterway charities and urban development organisations have begun the process of dramatically improving water safety by installing Reach and Rescue’s innovative water safety solution – the Portsafe.

If you’re still not familiar with the Portsafe, then here’s a brief synopsis: Portsafe is a public-access water rescue system designed to provide emergency services and members of the public a crucial opportunity to conduct swift and directionally-accurate rescues by giving them permanent access to effective rescue equipment.  It securely houses a long-reach telescopic rescue pole, an emergency throwline or both inside lockable boxes that are accessible via a code granted by quoting the Portsafe’s location number to the emergency services.

REVOLUTIONISING THE SAFETY OF SALFORD’S WATER

Roughly ten bodies every year are being fished out of water in Manchester and the surrounding areas with one of the most recent drownings occurring in the River Irwell in Salford in the middle of July.  As a result, Salford City Council and Urban Vision Partnership are dramatically stepping up safety in-and-around the canals and quays in Salford after being advised by Greater Manchester Fire and Rescue Service to replace 77 outdated lifebuoys with Reach and Rescue Portsafes containing emergency throwlines.

The problems in Salford’s waters are two-fold: incidents of accidental drowning are as prevalent as the rest of the country but the area surrounding Salford Quays sadly has issues with anti-social behaviour including unsolicited swimming in the quay and vandalism – more specifically, vandals are shamelessly hurling lifebuoys into the water rendering them totally useless should they be needed in an emergency.  Understandably, councillors at Salford City Council are saying “enough is enough.”

Councillor David Lancaster, lead member for the environment and community safety, says “if the life ring is missing in the first place, because it has been vandalised, then there is no help available for the person in the water.  Using the secure cabinets to protect the emergency throwlines means they have a chance.”

Portsafe was developed in response to repeated reports of vandalism with existing water rescue systems; the security of the water rescue equipment inside means the rescuer always has opportunity to retrieve casualties in the water from safe distances.

We’ve already written about the Portsafe being used in a real-life rescue to save a member of the public from drowning in the River Great Ouse in Bedford.  Greater Manchester Fire and Rescue Service were instrumental in the installation of 20 emergency throwline boards across open-water areas in Greater Manchester in Spring 2019 – given the increasing success of the emergent Portsafe, it’s easy to see why Greater Manchester Fire and Rescue Service have recommended it to Salford City Council as the best solution to combat their issues of drowning and vandalism.

Canal & River Trust are a national charity with the compelling mantra ‘making life better by water’ fuelling their desire to significantly improve Britain’s waterways.  The transformations they make to the areas surrounding rivers, lakes and canals up and down the country aren’t just cosmetic – they’re actively boosting the safety of the public.  Their Manchester branch has worked tirelessly with Manchester city council to install permanent barriers along high-risk areas of the Rochdale canal in Manchester city centre; Lock 89 off Whitworth Street is a particularly dangerous area owed tragically to the loss of two teenage boys in the water there in 2018.  In addition to the installation of barriers, Canal & River Trust have collaborated with local councillors and Greater Manchester Fire and Rescue Service to install Reach and Rescue Portsafes with telescopic rescue pole in Manchester city centre.  Two are currently installed – one at Canal Street and one at the aforementioned Lock 89. 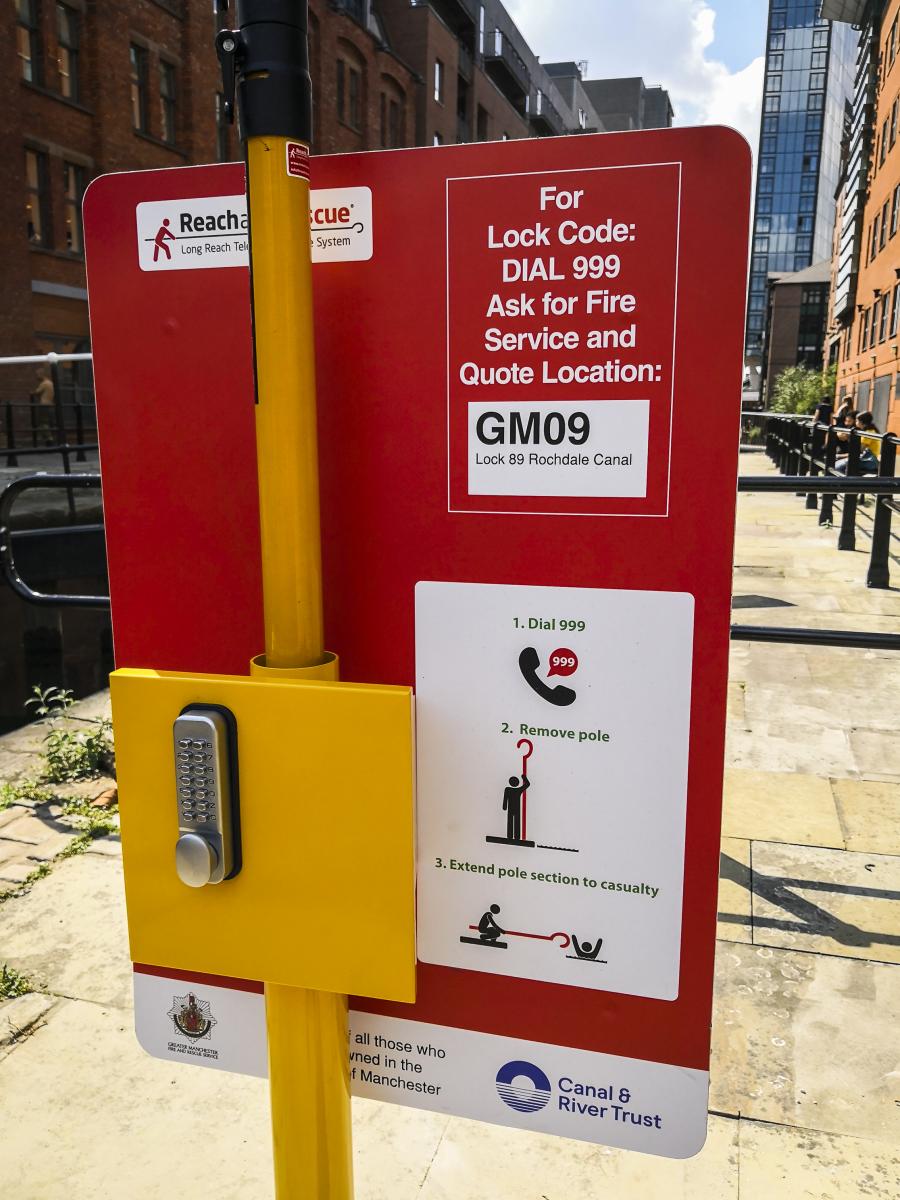 Hannah & Stuart from Reach and Rescue’s marketing team made the short trip into Manchester to inspect the newly installed Portsafes in situ with the one stationed at Lock 89 the first port of call.  By coincidence, Canal & River Trust Community & Youth Event’s Co-Ordinator James Long just so happened to be hanging out along the canal towpath so naturally he jumped at the chance to give his take on the newly installed lifesaving equipment.

“The Reach and Rescue system is really important in an area like Manchester where water safety is a real priority for the trust and our partners” says James.  “We want people to be contacting the emergency services before they start a rescue… it means people are less likely to get into trouble when attempting a rescue themselves.”

The second Portsafe installed by Canal & River Trust in Manchester city centre is only 10 minutes up the Rochdale Canal from Lock 89, adjacent to Canal Street.  This stretch is a particular black spot as four bodies have been recovered from this area in the past decade alone. 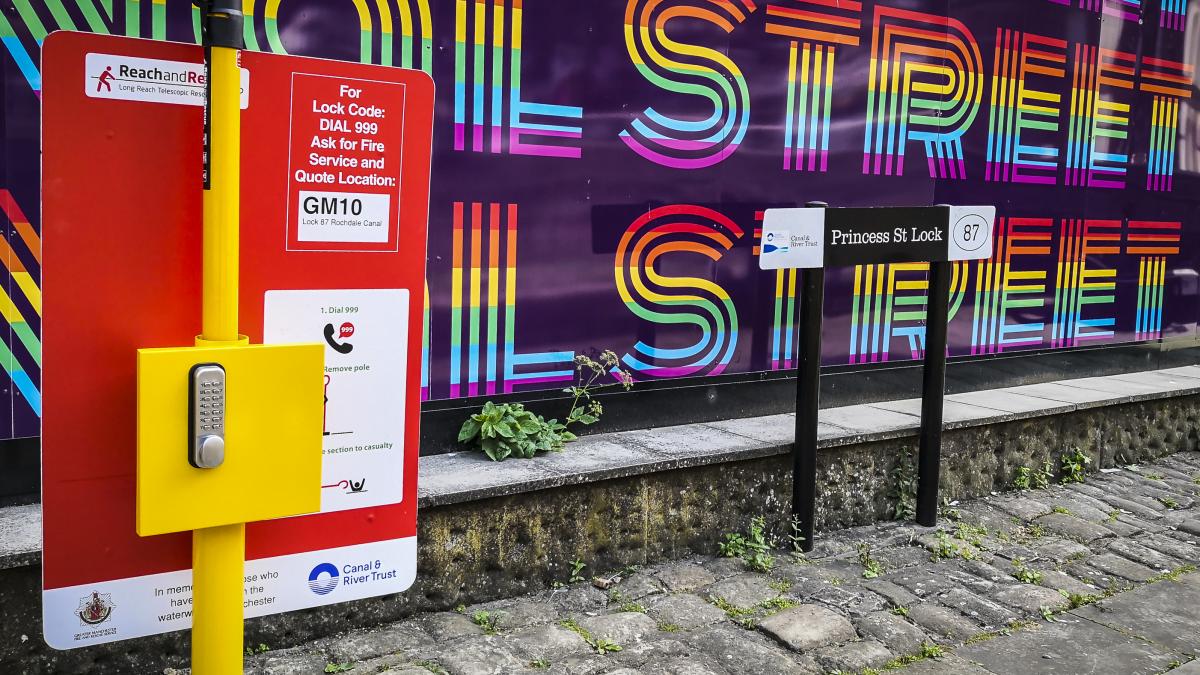 More lifesaving Portsafes are set to be installed across the North West this week so check back soon.

NEWS FROM ELSEWHERE AT REACH AND RESCUE…

News of Portsafe is currently dominating – but, there’s more happenings going on at Reach and Rescue.  Here’s a few of the latest snippets for you to digest:

If you follow us across our social media you’ll have seen the launch of our #ThrowbagChallenge.  The rules are pretty simple: 1 throwbag, 1 bottle of water & 10 steps (although all the firefighters who’ve taken part have voluntarily upped it to 15 steps!)

Place the bottle, take 10 steps back then knock the bottle over with your best throwbag throwing technique.  We have invited firefighters, rescue professionals, water safety charities & distributors both UK-wide and international to take part – the results for us have been… well, viral.  Have a browse of the #ThrowbagChallenge hashtag for yourself on Twitter.  The key message can’t be ignored though: the emergency throwline throwbag is an essential piece of water rescue equipment that – if thrown accurately – can save a life.

Elsewhere, there’s solid news coming in from our production department that the move into new manufacturing facilities has finally been completed.  The new site is 6 times bigger than previously with 178 square metres of space; more space = opportunity to make more poles!  We’ll also have space for a permanent, dedicated showroom so if you’re ever in the area, feel free to pop down and have a look around!  Here’s a sneaky preview vid from our Facebook page:

Finally, we’d like to officially announce our attendance at the Emergency Services Show in September.  We’re all super-excited to showcase our innovative water rescue equipment to the wealth of professionals in the emergency services sector when the event kicks off in September at the NEC in Birmingham.  Come on down to stand C27 to check out our rescue poles and get a hands-on demonstration with the Portsafe.

For more information on any of the topics discussed in this article, get in touch with Stuart: stuart@reachandrescue.com.

Portsafe has already saved a life!  Read about the real-life rescue to save a member of the public from drowning in the River Great Ouse in Bedford.

Speak to us about any of our innovative water rescue products by calling us on 03301 595 088 or by emailing.