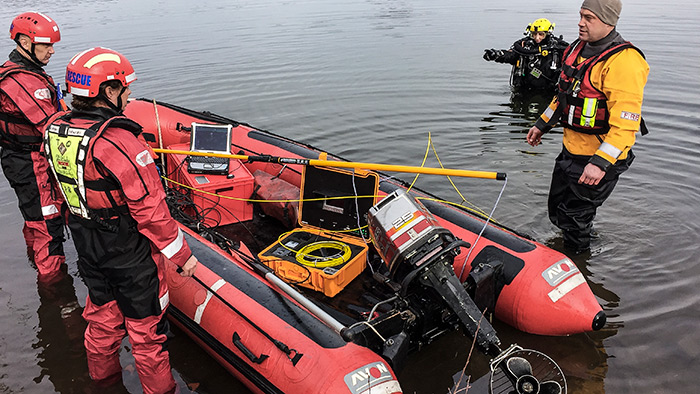 Join us in celebrating the innovative search and inspection camera attachment’s 7th birthday!  Since its launch back in 2012, the search and inspection camera has grown into an indispensable tool for successful search and rescue missions.  We’re immensely proud that it is used by Police forces, the military, SAR teams and border forces nationwide.  What better way to honour such a legendary workhorse on its milestone 7 years than by highlighting our favourite real-life scenarios in which it has been deployed successfully.

In an investigation to find evidence of a double murder, a Kent Police Specialist Search Team discovered a knife resting on a riverbed using the Reach and Rescue 17m telescopic pole and with the Underwater Search and Inspection Camera attached.

A drone was used initially to survey the stretch of the River Stour in Fordwich.  After the particular location was chosen, the search team deployed the rescue pole with search camera attached with success; the murder weapon was successfully located and retrieved from the river with the work undertaken with the camera resulting in a conviction and sentencing.  Plus, numerous police hours were saved through negating the need for a costly specialist dive team – and the Police search team didn’t have to risk entering the water themselves. 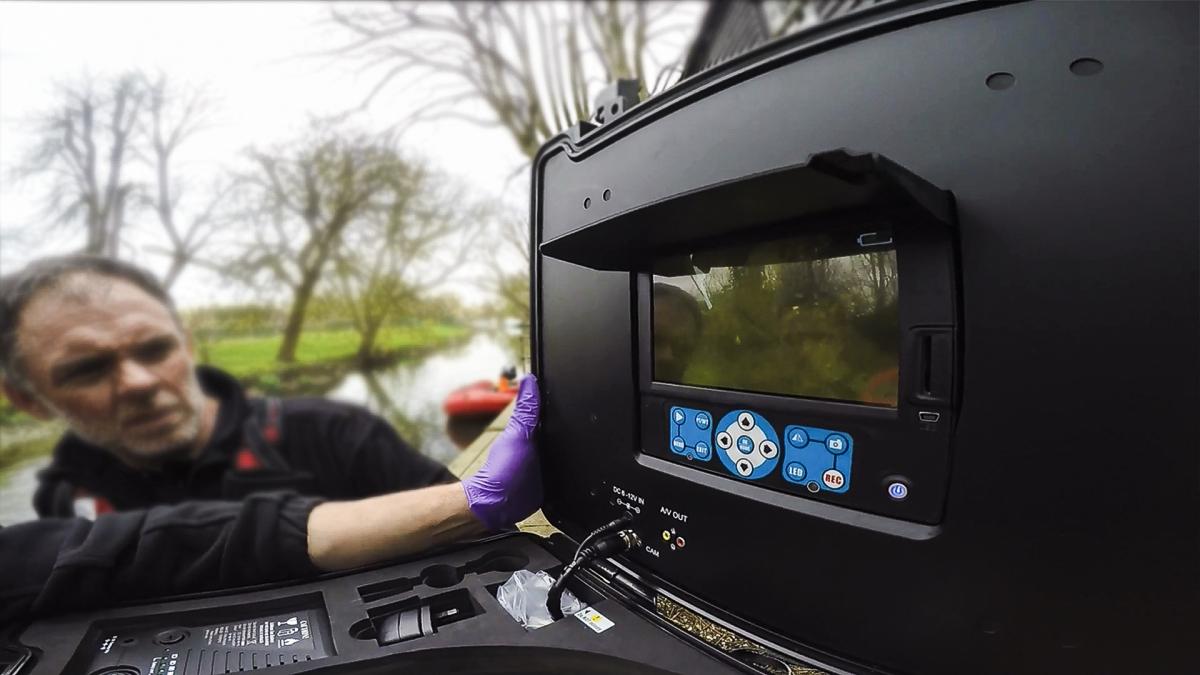 On the 3rd of August, the River Rescue Group from the Red Cross Rescue Corps were deployed to Hivjufossen in Norway on a mission to search for an American tourist who had disappeared in the adjacent river a few days earlier on July 24th. 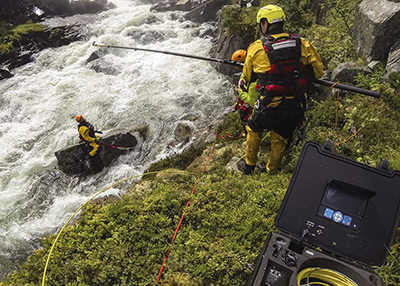 In a demanding operation at the base of the ferocious waterfall, operatives from the Rescue 3 Swiftwater and Flood Rescue Technician team relied on the cameras ability to scour beneath the water’s surface without the risk of entering themselves.  The end result was a successful operation as the team recovered the missing tourist’s body thanks to the assistance of the Reach and Rescue Pole and Search Camera.

Below is a tweet from Dorset Police’s specialist marine policing team.

The Dorset coastline represents the Maritime and Coastguards Agency’s (MCA) busiest area in terms of search and rescue incidents and the Poole lifeboat is the most tasked lifeboat in the country.  Having the search and inspection camera as part of their daily equipment has proved to be an invaluable resource.

A search operation to locate a body was carried out in March 2017 by Search and Rescue personnel in Cheshire. 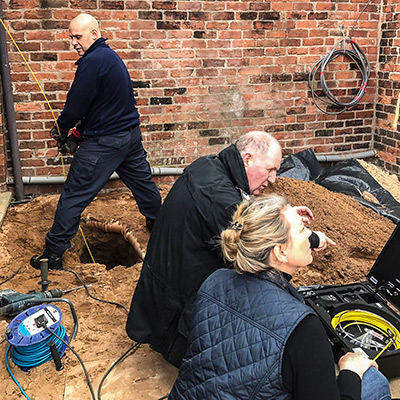 With the assistance of the camera attachment, the SAR team finished their mission a lot quicker and safer than usual – the camera negated the need for police officers to enter the well themselves. Through utilising the camera’s ability to beam pictures back to the LCD screen, the team avoided any potential risk of falling down the 10m deep well.

The Inspection Camera’s LED function illuminated the well so their visibility was exceptional; no search technician had to enter the well with a torch as they could see all the images on screen in detail.

Northern Ireland’s G8 summit was billed as one of the largest policing operations the country has ever seen; 5,000 PSNI officers were joined by 3,600 other officers drafted in from police forces from across the UK along with military and private security firms all in an effort to protect the world leaders during their stay in the area from the heightened threat of terrorism. 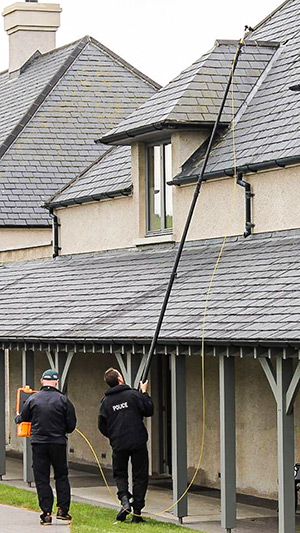 As part of the security operation, police officers utilised the search and inspection camera to scour the buildings and rooftops surrounding Lough Erne Resort throughout the 6-week operation leading up to the event.   With prior reports of an abandoned car bombintended for detonation at the resort during the G8 summit, the search and inspection camera proved a vital piece of equipment in confirming the area free of any explosives stashed out of view.

The team at York Rescue Boat were called to the scene of a rather surprising report of a submerged vehicle in the River Ouse in York. Their task was to work with North Yorkshire Fire and Rescue Service to locate the underwater car and record its exact location.

Once located, the team was then able to use the Inspection and Search Camera to confirm how the car had settled; whether on its roof or its wheels and if it was in a stable position for recovery. The subsequent footage recorded by the camera proved instrumental in helping incident commanders assess the risk of recovering the vehicle. 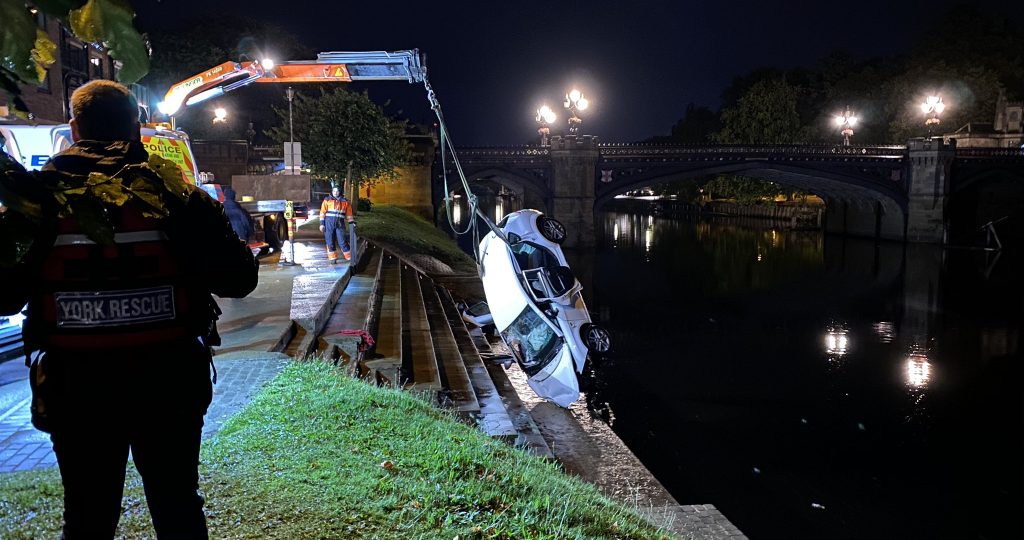 The Search and Inspection Camera – How it Works

Reach and Rescue’s versatile Search and Inspection Camera has multiple applications such as body searches, weapon searches and for security checks on people, locations and vehicles by Police and Military Services.  Security Officers from factory plants inspect the exterior of incoming and outgoing haulage whilst Her Majesty’s Border Force use the camera attachments to search the hulls of sea vessels coming into harbour.

Here is our demonstration video giving a comprehensive overview of how the system works.

Have you used the search and inspection camera?  Tell Stuart about it: stuart@reachandrescue.com.

Read about the real-life rescue to save a member of the public from drowningin the River Great Ouse in Bedford.